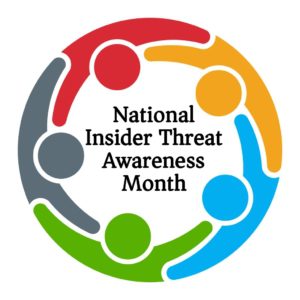 September is National Insider Threat Awareness Month! The National Counterintelligence and Security Center (NCSC) and the National Insider Threat Task Force (NITTF) are launching a month long campaign to educate federal employees, private sector stakeholders and other audiences on the importance of safeguarding our nation from insider threats and to share best practices for mitigating those risks. Every organization should take this opportunity to educate themselves on insider threats and assess their preparedness. Are you doing everything you can to ensure your data is protected from malicious or negligent employees?

The Insider Threat Is Real

Insider threats pose serious risks to government and the private sector alike. It’s a growing problem that shows no signs of slowing down. According to the 2019 Insider Threat Report from Cybersecurity Insiders 70% of respondents said insider attacks have become more frequent over the last 12 months, and 60% have experienced one or more insider attacks within the last 12 months.

Organizations have traditionally focused on protecting data from outside threats like hackers, malware and ransomware often overlooking that insiders can pose just as big a threat. After all, they have legitimate access to your company’s most valuable data and assets. The NCSC press release detailed some real-world examples of the serious impact insider threats have had on both government and business alike. Here’s a snapshot of the insider incidents referenced:

Protect your data equally against external and internal threats

While shocking this list represents just a few of the insider incidents that are becoming commonplace in both government and business. Our advice for National Insider Threat Awareness Month knowledge seekers – your data security practices need to protect equally against both external and internal threats.

Collaboration tools have made it easier than ever to give employees access to data to get their job done. However, giving users open access to everything (that includes your administrators) is no longer a viable option. Companies need to limit what trusted users can see and access based on who they are and other important variables, and then control what they can do with sensitive information. This will not only the mitigate risks created by malicious employees, but the more unassuming threat – simple human error.

For additional guidance on how to safeguard against insider threats, we’ve put together some National Insider Threat Awareness Month resources to help you in your quest to secure your organization from the inside out.